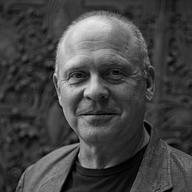 Paul Tesar is a native of Vienna, Austria, where he studied architecture at the T.U. Wien and received the professional degree “Diplomingenieur.” He practiced in a number of offices, most notably with Rupert Falkner of Vienna and Luciano Savi of Lugano, and collaborated with distinction on several major national and international competitions. With the help of a Fulbright Grant he came to the United States to study with Philip Thiel and Claus Seligmann at the University of Washington in Seattle, focusing on issues surrounding environmental experience and space sequence notation systems in architecture. After receiving his Master of Architecture he returned to Vienna as an assistant to Prof. Reinhard Gieselmann, head of the Institute for Housing at the Technical University, and as a lecturer on the topic “Architecture and Experience.” He also conducted research on housing and urban renewal and acted as an urban design consultant to the Planning Department of the City of Vienna. Before joining the faculty of the School of Architecture at North Carolina State University, he held teaching appointments in architectural design at the University of Washington, the T.U. Wien, and at Rensselaer Polytechnic Institute in New York.

Professor Tesar’s present teaching, research, and scholarship centers on an understanding of architecture as a public and social art. In addition to architectural design studios he offers graduate level classes in Aesthetics, Typology, and Vernacular Architecture. He has numerous publications to his credit and has lectured and served as a studio critic in many architecture schools in the U.S. and abroad. His dissertation for his Ph.D. (Vienna 1992) examines the work of the philosopher Alfred Schütz for its applicability to architectural theory, and proposes a theoretical basis for the possibility of intersubjectivity in architectural expression.

Paul Tesar, a member of the Academy of Outstanding Teachers since 1978, was named Alumni Distinguished Professor at North Carolina State University in 1992, Cass Gilbert Visiting Professor at the University of Minnesota in 1996 and 2004, and served as Visiting Professor at the FH/Hochschule für Technik in Stuttgart, Germany, in 2000. In 2005, Paul received the UNC Board of Governors Award for Excellence in Teaching. Paul served as Head of the Department of Architecture in 1990/91 and as Director of the School of Architecture in 2007/08.