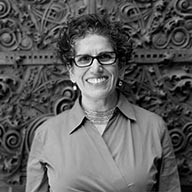 Patricia Morgado received her bachelor and professional degrees from the Universidad Ricardo Palma (Peru), and her Ph.D. degree from the Universidad de Sevilla (Spain). Patricia is a registered architect in Peru and Chile, and her professional degree is equivalent in Spain. Before moving to the United States in 2002, Patricia worked as an architect in Latin America’s internationally renowned firms Juvenal Baracco (Peru), Emilio Soyer (Peru/Spain), and Murtinho y Asociados (Chile), as well as for Spanish organizations EXPO ‘92 (Universal Exposition Seville 1992), and COAM (Colegio Oficial de Arquitectos de Madrid). Additionally, she worked in her own practice (1998-2002). Beyond her professional interests, Patricia has studied sculpture and drawing in Peru, Spain and Chile, and has participated in several collaborative exhibitions since 1981 and in a one-person exhibition in 1983.

Before joining NC State in August 2008, Patricia was Assistant Professor of Architecture at the University of Nebraska at Lincoln (2002-2008) and an adjunct assistant professor at Universidad Nacional Andrés Bello in Santiago in Chile (1999-2002).

Patricia’s areas of expertise include beginning design education, integration of architecture and landscape, and Latin American architecture, a topic she addresses in her graduate seminar. In addition to teaching courses in her specialty areas while at the University of Nebraska, in 2007 she also directed that university’s study abroad program in London, which included Seville and Barcelona.

Patricia’s long-term research goal is to study the role of Latin American architecture and the role it has in societies, communities, and the lives of individuals.