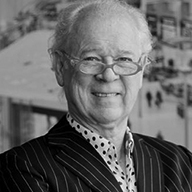 In 2010, the American Institute of Architects (AIA) honored Fentress with the Thomas Jefferson Award, recognizing “a portfolio of accomplishments that evidences great depth while making a significant contribution to the quality of public architecture.” He was also awarded the AIA Western Mountain Region 2010 Silver Medal for “significant contributions to the profession and the citizens of the region, and transcending local boundaries in making these contributions.” He was inducted into the AIA College of Fellows in 1996, and is a member of the Royal Institute of British Architects.

After graduation Fentress joined the New York firm of I.M. Pei and Partners where he worked on several international projects, including the Raffles Place Center in Singapore. From there he joined Kohn Pedersen Fox of New York, where he was Project Designer for the Amoco Building in Denver, Colorado. His work on the Amoco Building earned him recognition as Building Design and Construction Magazine’s “Young Professional of the Year,” and in January of 1980, Curtis Fentress established his own studio. Today, Fentress Architects has five international studios and a team of 150 professionals.

Motivation to serve on Leaders Council:

Between my education, several of my employees’ educations, and a scholarship, I have a lot invested in the school and care deeply about it.

With our focus on public architecture, I feel a sense of commitment to the people who commission, pay for, work in and live with these singular buildings. I approach each design as a new challenge, each one inspired by the community it serves, and by the context and culture rooted in place, pride and people.