Putting the user first: two alums explore how their heritages shaped their work as UX designers

We took time to sit down with two graduates of the Master’s of Graphic Design program, Laura Rodriguez [MGD ‘11] and Luis Zapata [BID ‘11, MGD ‘17] to ask them about their experiences as students, as well as how their cultural identity has shaped their careers.

National Latinx Heritage Month is September 15 – October 15 and the College of Design is sharing stories from Latinx and Hispanic students and alumni. See our related stories here.

We took time to sit down with two graduates of the Master’s of Graphic Design program, Laura Rodriguez [MGD ‘11] and Luis Zapata [BID ‘11, MGD ‘17] to ask them about their experiences as students, as well as how their cultural identity has shaped their careers.

Laura Rodriguez is an IBM User Experience Designer. Her work for the past 11 years has focused on Enterprise Collaboration software, Hybrid Cloud, and working in the CIO on internal tooling for IBMers. Having earned over a dozen patents, she is passionate about innovation in user-centered design through tailored virtual experiences.

Luis Zapata is a UX Engineer at Disney Media & Entertainment Distribution. He focuses on creating tools that bridge the gap between design and engineering by exploring design solutions programmatically. He has explored this areas through web, native, touch-interactive and vr applications.

How has your cultural background influenced your interest in design?

Laura: I am a Puerto Rican born in Germany, and raised in South Carolina, which is very atypical. I never lived in Puerto Rico. I don’t speak Spanish as a first language. It put me in a spot where for my American friends, I’m not American enough. And for my Puerto Rican family members, I’m not Puerto Rican enough. Having constantly been typecast and feeling those pressures, I think part of that makes you an empath. You’re really aware of human behavior, social interactions, or even trying to adapt in different circumstances, having to build personas.

Luis:  My grandparents were Puerto Rican, but my dad was born in New York, and then my parents moved to North Carolina. In most scenarios I read as white and I have that privilege of reading as white when I’m face to face. But then there’s always the stereotype of when they see my name, “What are they assuming?” So that’s helped me to be empathetic.  As designers, you are just expected to wear more hats than you can possibly put on your head. You’re supposed to be an expert in twenty different fields, no matter what fields they are, and I feel like that sort of adaptability has helped me throughout grade school, and even through my design life.

Do you feel like that ability to adapt different personas in your own life translates to your work today?

Luis: I feel like all this gives you a perspective of thinking through the scenarios. It does help me think through cases, examples, and scenarios a bit better.

What kind of community did you have while you were in school?

Luis: I was not part of Latinx as either undergrad or grad.  I didn’t really feel like I was Hispanic enough to really fit into that group. But I did join the Technician and student media as an undergrad. And so when I came back as a graduate student, I was a graduate photo advisor, helping teach the student photographers how to shoot different events. So I wasn’t using my cultural experience, but I was using my teaching experience.

Laura: That was a time in my life where I was finding myself and felt the most insecure I’ve ever been. I wouldn’t have even felt confident joining any kind of community. Now I’m at a point in my life where I love the skin that I’m in, and I am turning around and mentoring and working with young Hispanic women and giving them the chops and confidence. So I’m in a place now where I’m contributing to that community.

Are you finding other individuals who feel the way you did, not Hispanic enough? How do you navigate that?

Laura: I haven’t met anyone with my one-to-one experience; the biggest common denominator we have is the cultural hierarchy – being raised with a sense of being seen, not heard, the notion of the father figure and that women are subordinate. You need to unlearn that if you’re going to be a really good UX designer in the tech industry.

Luis: In my mentoring, I do not have someone with similar experiences. In a previous company, the top people were men, and the rest were women. So it was important to me to make sure that the women were heard.  I would encourage them to be louder, when they could, and felt comfortable doing so.  There was another senior developer who was a woman, which is strange in the tech world. She was a powerhouse in her own right, and so I would encourage these women by pointing out what she would do through that professional aspect as well as just design. So that is my mentorship experience.  But I haven’t met anyone like me one-to-one.

So why does representation matter in graphic design?

Luis: It’s a great question. I just I think back to this example when I was in school, and we were talking about why certain products and certain demographics fail, and it was because they use the wrong language – that language doesn’t resonate with the user. Fast forward a few years doing stuff with the interactive media firm that I was with prior to Disney. We’d be doing things for other groups of people, different ages, different races, and that memory would always come back, and I kept asking myself:  “Are we doing this right?” And for me that was always the question: “Is this hitting the group that we that we want to hit?” “Is there a better way to say this?” So we were always making sure that there was someone within those groups buying into it. We were never selling a product to a user, but we were asking users to  engage with an experience.

Laura: I think it’s two pieces for me. The first one is exactly along the lines of what Luis is saying, where you need people of different cultures to bring that experience to make it universal, because we’re limited by a lot of one-size-fits-all experiences. One time we designed software that greeted you when you came in, like “Hey, Dawn!” We wanted to have this super cool tailored feeling. Then we learned that in China it’s really rude just to use someone’s first name like that, so we’re inadvertently creating a software experience that’s offensive. There’s so much nuance. There are things you don’t know,  so you don’t even know to ask the question. I also think back to that soap dispenser that didn’t compensate for various skin colors so it only worked on white hands. Or how Band-aids just came out with colors for different skin tones. Even shampoos in hotels only cater to one hair type.  All of these things are microaggressions ingrained in our everyday lives. If we have more representation, then we would have more inclusive experiences. The second piece that’s important is elevating people of different cultures into these high-paying, reputable roles in the tech industry. Diversifying leadership positions so that others can aspire to those roles is still a huge gap.

Luis: I just want to add, it’s important to not be the one to close the door behind you. I’m not sure if you’ve heard about Amazon’s application algorithm that if you feed it applicants, it tells you who it thinks it’s a good candidate – it’s heavily swayed white. It’s because part of the learning is looking at all the other good applicants or good employees that came in the past. Well, we know who was being hired prior, and so seeing more and more ethnic diversity in the entire ladder helps. It also gives you that perception that “I can strive to be higher.”

Laura: I agree. AI is driving our experiences and it’s important to look at who’s building the tools that shape our future.

Melissa Manjarrez Dominguez is a first-year graduate student in the college’s Landscape Architecture and Environmental Planning program. In her story, she recalls her youth in Sinaloa, Mexico, her experiences facing anti-immigration legislation in Alabama, and her desire to create landscapes that are enriching and available to everyone. 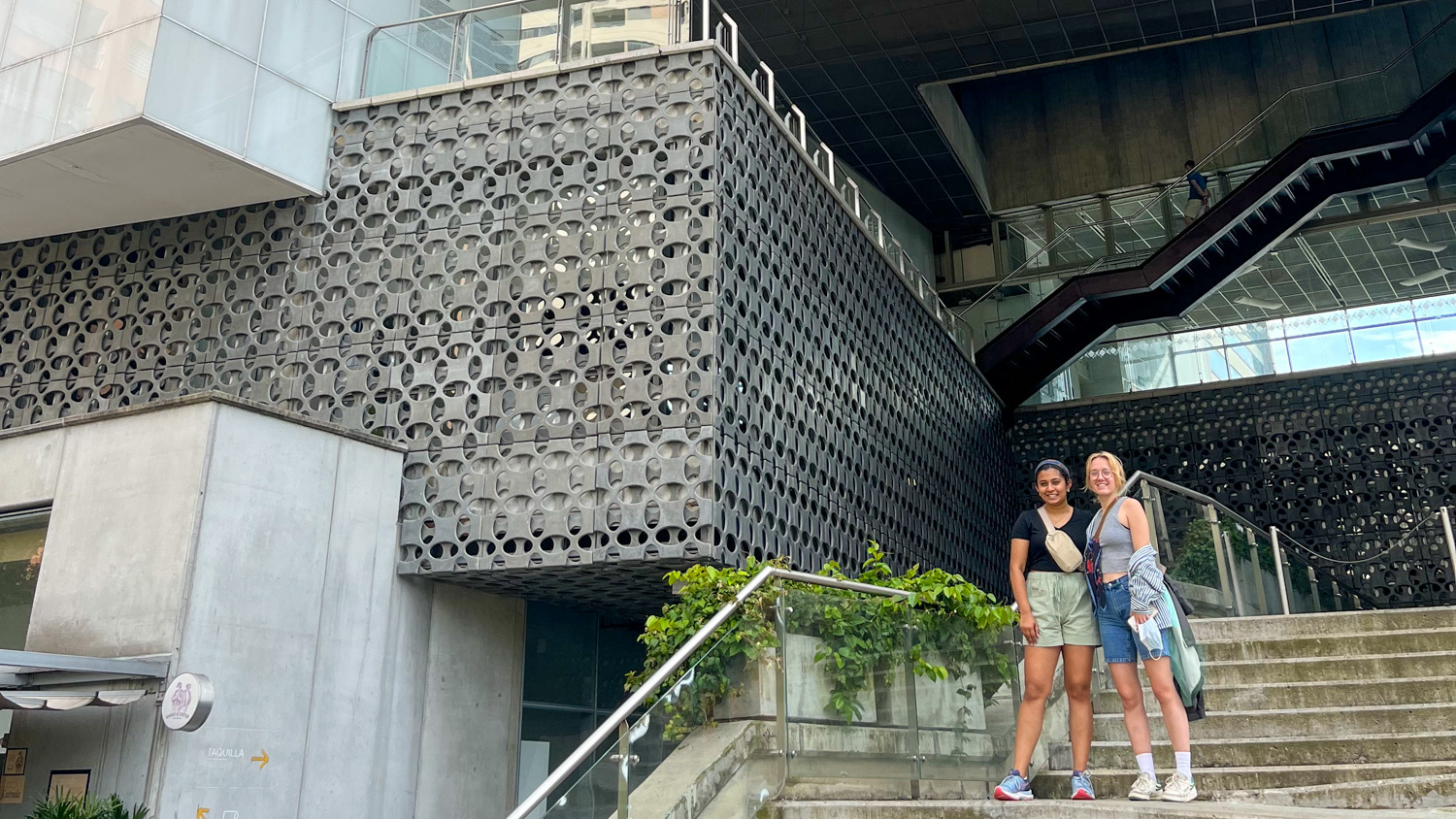