Q&A with Burak Erdim on his new book, Landed Internationals

Erdim teaches studios and courses on the global history of architecture and urbanism from the mid-19th century to the present. Landed Internationals provides a refreshing perspective on the aims of mid-century architectural education and examines the operations of housing and planning networks through the case study of the establishment of the Middle East Technical University in Ankara, Turkey. 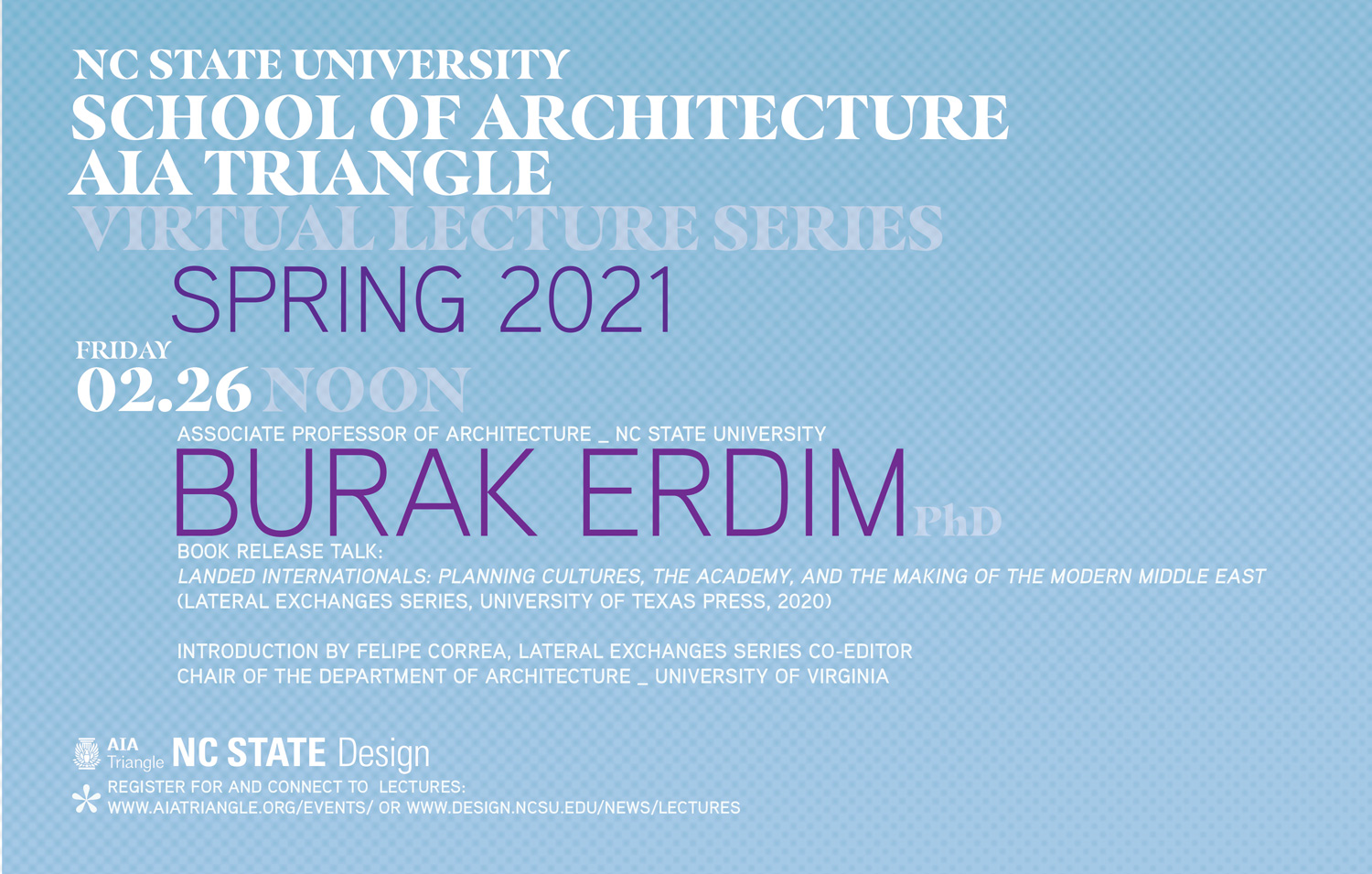 Burak’s forthcoming book, Landed Internationals: Planning Cultures, the Academy, and the Making of the Modern Middle East examines how postwar encounters in housing and planning transformed the dynamics of international development and challenged American modernity.

Tell us a little bit about the book — what inspired you to write it and focus on this topic, specifically?

The rise of a real estate mogul to the Presidency of the United States came as a surprise to many around the world. My book traces this development to its multiple and varied origins at an earlier phase of globalization in housing and construction finance. It examines the operations of a multidisciplinary group of housing and planning experts who conceptualized the university and its campus as the nexus of an international project to establish housing and construction as the engine of a global economy during the post-World War II period.

At the same time, I should note that this book started off as a far less ambitious project than where it ended up when it went to the press. I began this project because I was fascinated with the architecture and culture of a school of design much like ours, established during the immediate postwar period, but this one in the Turkish capital of Ankara, and interestingly as the founding department of the Middle East Technical University (METU), one of today’s premier research institutions in the region. METU was founded in 1956 as a school of architecture and community planning through an unlikely collaboration between the United Nations Technical Assistance Board, the United States Foreign Operations Agency, the University of Pennsylvania School of Fine Arts (Penn), and the Agencies of the Turkish Government.

However, when I began the project, the international roots of METU were only marginally recognized by its various founders. For instance, the Penn faculty who were responsible for developing the curricular and spatial organization of METU’s campus only reluctantly took credit for their work. They were, to use Sarah Goldhagen’s term, “anxious” about their role as postwar experts, and as agents of American power and hegemony.1 Similarly, the Turkish administrators and architects did not recognize the contributions of their American counterparts, as they sought to claim their legitimacy as local and international experts. It was through this process of rivalry and cooperation that American models of housing and construction were contested, transformed, and implemented, not directly through housing policies, but in the form of training and education. The resulting institution yielded a whole new group of experts that the book refers to as, “landed internationals” who in turn developed new policies and modes of practice that challenged American models of development. As a scholar operating across these two geo-political landscapes, I wanted to further explore how this contentious dynamic yielded such a comprehensive and innovative project. In order to reconstruct the shape and workings of this network I had to formulate a new methodology that I call, “an archaeology of encounters.” Each of the six primary chapters of the book examines a key document or a particular phase in the construction of the University and situates the project within the international network of its production. In other words, the book identifies who was involved in each phase and utilizes their multiple and competing narratives to decipher METU’s documents, buildings, and spaces.

How do you feel this work relates to other works on postwar architectural planning?

One of the key contributions of the project is that it examines postwar networks of social and economic development, not from the sole perspective of the agents and agencies of the West, but within an international field and from the point of view of Ankara, Turkey. Steven Nelson writes, “To decolonize means exploring Paris from the vantage point of Dakar. To decolonize means analyzing Dakar in ways that don’t center Paris.”2 Adding to this line of inquiry, my book examines postwar contexts of decolonization and national liberation, not from the perspective of Washington, DC, but from Ankara. When we make this shift to reposition our view from Western institutions to the frontiers of the Cold War, a number of unexpected things happen beyond the mere “inclusion” of non-Western agents and agencies in the lexicon of postwar expertise, planning, technological determinism, and development. Inclusion suggests the preeminence of an existing body or a paradigm into which new things are added. Inclusion operates on the assumption that these new things will yield to the order of the existing paradigm. Consensus is required and the dominance of a universalizing center is strengthened and ultimately remains largely unchallenged. The view from Ankara, however, provides a different picture, and reveals that it wasn’t consensus, but difference, and even contentious battles and rivalries, that played a central role in the shaping and reshaping of postwar projects such as METU.

How does this book tie into your work at NC State? Does it trickle down into teachings with your students?

Absolutely! This project completely transformed the way I understand architectural education and practice. When I was an architecture student, I was taught that architects, landscape architects, and designers shape our world. However, if we dig a little deeper into what architecture and planning projects are, we see a much broader international supply chain made up of an economic and bureaucratic network of finance structures, corporations, politicians, developers, interest groups, lawyers and policy makers. It is within this web that we normally operate and yet, our education rarely prepares us for that. In my Global Modernisms seminar course, we situate architectural production within this broader international network. We study, map, and visualize the agents and agencies involved in the production of projects across the globe utilizing digital visualization tools. The results can be eye-opening to students and practitioners. First, we acknowledge that the local and the global are interconnected and have been so for some time. Second, we also find that our effectiveness as citizens and designers is directly proportional to the extent that we understand the shape of this broad network of globalization of finance and development.

Do you see examples of this type of transnational coalition-building today? In what ways have these relationships changed or stayed the same?

This is a great question. Cold War historian Tony Judt noted that one of the reasons that the Cold War lasted so long was because it worked.3 At the risk of grossly sentimentalizing the Cold War, I think we can say that we lost the checks and balances that the first, second, and third worlds provided. We now have a globalized oligarchy which divide and rule governments and institutions through a radicalization of differences and centralization of finance. Difference was interestingly a key element in the construction of coalitions during the global Cold War, but not radicalized difference. For instance, countries sought to participate in the world economy, but didn’t necessarily want to tie their markets or their urbanization process to global finance. This is unfortunately not a real option at the moment. The fascinating thing about METU is that it is among the few remaining educational institutions in the world that carry the torch of independence and difference all the way from the postwar period to the present. While the center of Turkey’s tech, energy, and defense elites, METU also manages its own food and recreational establishments. METU students and faculty often come together to protect their campus as a greenway against urban expansion and speculative development. In this and numerous other ways, METU continues to provide an excellent example to other institutions around the world. It shows that the university and the campus is still the nexus of international coalitions, innovation, and development. It also dares other institutions of higher learning to encourage and develop alternative models of citizenship, research, and practice and to challenge existing models for a sustainable and equitable future.