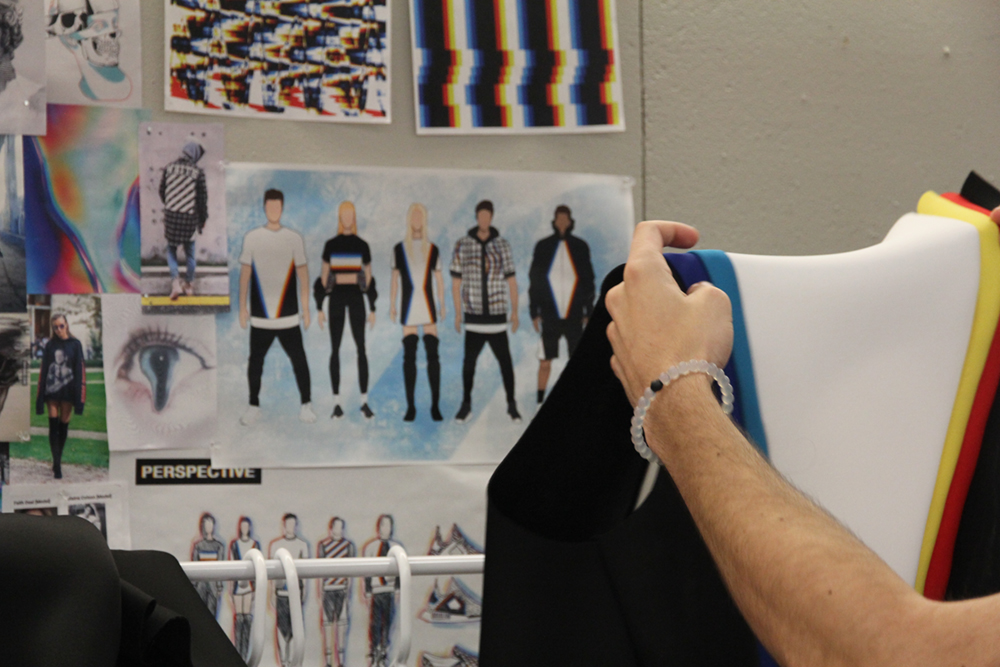 In high school, senior industrial design major Christian Fuda ruined a pair of shoes in the ocean. Figuring that he had nothing to lose, he attempted to salvage them with paint, and a shoe customization business—and a passion for footwear design—was born.  “I always had a draw towards tinkering with things,” says Fuda. Though he was very interested in footwear design, Fuda wanted to keep his options open and decided on majoring in industrial design. “I knew even if my future career wasn’t in footwear that I wanted to do something creative and design based. I googled ‘how to become a footwear designer’ and industrial design came up,” says Fuda. In addition to classes in his major, Fuda took several textiles classes; he realized that to best set himself up for success in the footwear industry, he needed a solid knowledge of textiles and fibers, material not routinely covered in industrial design classes. “With footwear, so many shoes are knit now or woven, so I need to have an understanding,” Fuda says.

This extra fibers knowledge was an asset to Fuda when, looking to challenge himself, he stepped outside his comfort zone and decided to participate in Art2Wear. Though he didn’t know how to sew or make patterns, he taught himself by watching YouTube sewing videos. Fuda says, “It’s opened my eyes a bit more to the fashion and garment industry which is great because I still have an interest in that area in addition to footwear design.” The whole Art2Wear experience has been great, Fuda says. “It’s exciting. I love working with everyone; it’s a diverse group, and everyone brings their own take on fashion and the theme to the table.” 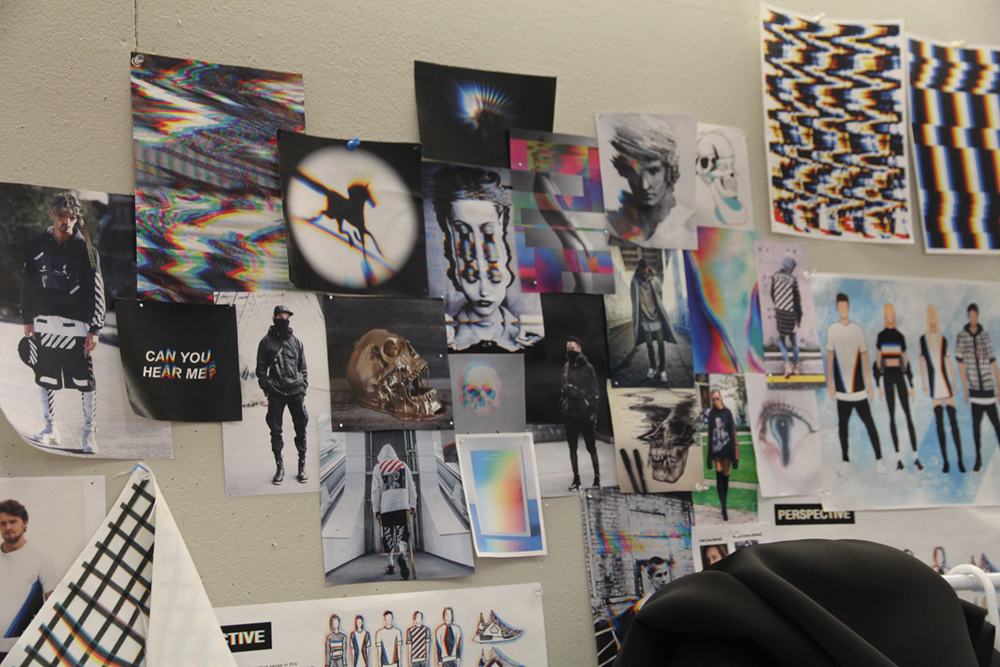 Fuda approached this year’s Art2Wear theme, “Caesura,” meaning a break or sudden stop, by playing with color and light. Specifically, he named his collection “Perspective” after creating a mood board of inspiring fashion and reflecting on his time at State and in the College of Design. The Perspective collection explores chromatic aberration, which Fuda explains as the separation of colored light caused “when a lens or glass or something is causing a disruption between your eye and light or between light and a surface. It creates a blurred effect. If you look close enough, it’s really just the separation of colored light. It’s blue, light blue, and then red, and then yellow.” Sometimes, chromatic aberration can look very dramatic and other times it can look out of focus, or blurred. Fuda tied this in to his theme—“I really wanted to capture that if you just change how you look at something or if you look closer you can find beauty in all things. You just have to have the right perspective and mindset to be able to appreciate it fully.”

Though Fuda is an expert at making his own opportunities and self teaching, he recognizes what an asset Assistant Professor of Art + Design and Director Art2Wear Justin LeBlanc has been to his learning. Fuda says he took what he learned in LeBlanc’s shoe making class to make the original shoes for his models to wear. Fuda says, “I wanted to have footwear be the main focus, which is also partially why my garments are so heavily black and white; I wanted the shoes to stand out as well but still be tied into the collection as a whole.” 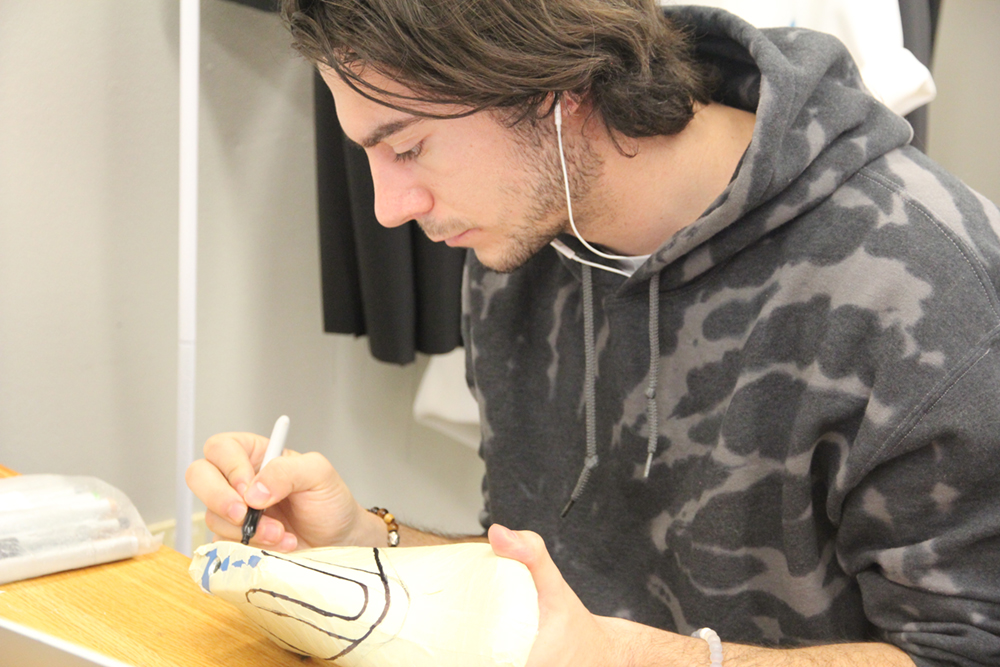 Fuda hasn’t shied away from opportunities to expand his footwear design skills and portfolio. He has competed in design competitions through Pensole, an Oregon-based footwear design academy, where “the contest was simply to design a shoe for your target consumer that was loosely inspired by a city,” Fuda says. “I ended up doing Dubai because I’ve always liked the buildings and architecture there and thought I could work with the form and color and the contrast between the ocean and dessert.” Pensole selected their favorite 64 entries and then those designs faced off against each other, organized in brackets and advancing through rounds based on open voting results. Fuda’s design made it to round 16. “It was a lot of fun; you make a design and it’s out of your hands and you just watch and see.” Perhaps the best part though is the experience and connections designers make in the process of the competition. Fuda says, “it’s a great network of people who can help you in that industry… they do great things for aspiring footwear designers.”

In addition to running his own shoe business, designing for Art2Wear, and his regular coursework, Fuda is a Park Scholar. He is one of about 35 NC State students each year awarded a Park Scholarship on the basis of outstanding accomplishments and potential in scholarship, leadership, service, and character. The Parks program was a major asset to Fuda because it creates a community of like minded students who meet regularly and attend events and learning labs. “The Parks program made it really easy to adjust to coming to school while staying true to myself and the things I believe in. They gave us amazing opportunities and all sorts of extra curricular events and programs, leadership academies where we’d have speakers and we’d talk about leadership techniques and diversity academies, excursions to places like Washington D.C., and learning labs about anything important to either us individually or to the class as a whole,” Fuda says.

Like many soon-to-graduate students, Fuda has been concerned about what his next step is. He says, “My junior year, I was very stressed. I was watching my friends trying to find jobs and struggling. But then, at the start of this year, I had a professor in an entrepreneurship class who said something along the lines of ‘you know, if you want to try something, even if you give your yourself two years when you graduate to try and get something off the ground, you’re going to be 23 or 24 years old, and if it doesn’t work, you’re only 24, and you have your whole life.’ And I was like wow you made that sound so simple. I felt a little more comfortable after thinking about that and able to really focus on what I wanted to do next.” When Fuda relaxed, an opportunity presented itself. Fuda says, “my art teacher from high school reached out to me and said she had a friend who worked at Converse and they were looking for a footwear design intern in Boston for the summer. They asked me to send them my resume and website, and within two days I had two interviews. I heard back a week later, and they offered me the position.”

While he is excited about his upcoming job and the work he has done at State, Fuda says that the “highlight” of his career so far has been creating and hand delivering a pair of custom World Series championship shoes for Boston Red Sox player Shane Victorino. “I actually got to deliver them to him at the World Series parade,” Fuda says. While he attributes a large part of this opportunity to Instagram and its power to connect people around the world, it is clear that Fuda’s drive, creativity, and design-focused thinking have played a significant role in his success.