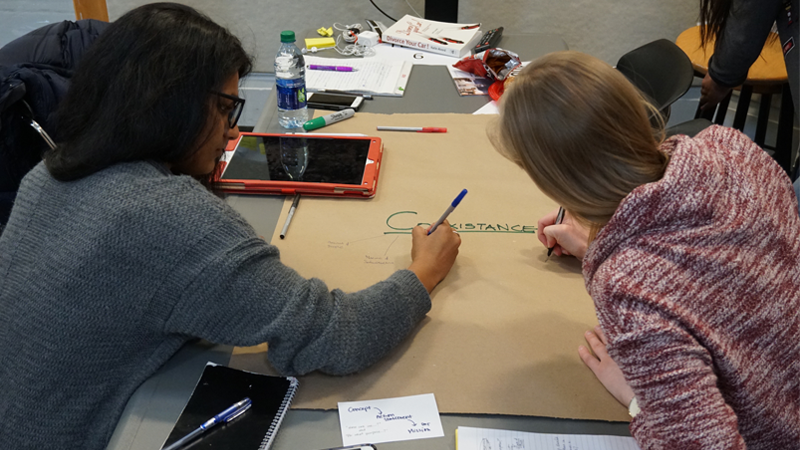 Kofi Boone was cognizant that a growing global issue such as the effects of climate change could not be solved in a matter of days.

What he witnessed, though, during DesignSprint, an intensive four-day collaborative exercise in design thinking and problem solving that was held in late March 2019, was students thinking creatively and broadly to address various aspects of the evolving issue.

DesignSprint, an iteration of DesignWeek that originated in 2017, was created by NC State’s College of Design Department of Landscape Architecture. The event included 70 students from the College of Design, Duke University, UNC-Chapel Hill and from other disciplines at NC State. It was inspired by the book “Sprint,” written by Jake Knapp, who spent 10 years at Google and Google Ventures and crafted the five-day process for mapping out and testing ideas to solve problems. 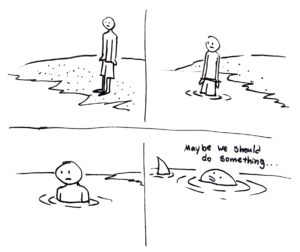 “[Climate change] is a generational issue that we are facing,” said Boone, Professor of Landscape Architecture at NC State, who organized the event with Celen Pasalar, Assistant Dean for Research and Extension and an Assistant Professor in Landscape Architecture. “So to say ‘Hey, solve the world’s problems in five days is a little unfair.’ What I noticed in a shorter amount of time with an emphasis on creativity, not the burden of actually producing a real ‘solution,’ was that students approached it with a lot more enthusiasm and, in the end, it came through in their presentations. 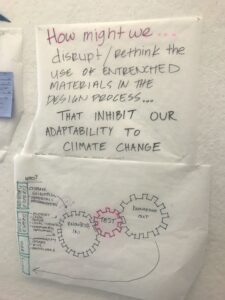 “They had more confidence in throwing wild ideas out there and not being afraid to challenge basic assumptions, and some of the leadership characteristics that we want to see in our design students shined through. I thought in this third go-round there was more breadth, meaning there were a lot of things students uncovered just based on their curiosity that a lot of us in the room had no know idea were even out there. So that was a good thing.”

The first two DesignWeek events sent students to eastern North Carolina to address specific issues that communities were dealing with in the aftermath of Hurricane Matthew, which plowed into the state in 2016. This year, for logistical reasons, the shortened DesignSprint was conducted on campus.

Ryan Hargrove, an Associate Professor at the University of Kentucky who earned his PhD from N.C. State, and Ignacio Bunster-Ossa, of AECOM an internationally recognized practice leader for climate change in landscape architecture, served as the keynote speakers.

“They had more confidence in throwing wild ideas out there and not being afraid to challenge basic assumptions, and some of the leadership characteristics that we want to see in our design students shined through.”

“This year we backed off a specific location and focused on two things,” said Meg Calkins, Head of the Landscape Architecture Department. “Rapid, creative ideation and ideas for addressing climate change — anything from looking at processes for producing products to design proposals for built landscapes, to looking at systems like the supply of reclaimed building materials and the redistribution of those building materials.”

In planning DesignSprint, Boone said the organizers became aware of “Drawdown,” a book that featured 100 case studies and solutions to global warming and was edited by Paul Hawken, a founder the Smith & Hawken garden lifestyle brand.

“It talks about food and agriculture,” Boone said. “It talks about transportation; land and how we deal with it; building and materials; energy generation; and it immediately opened the door to all these other aspects of climate change.” 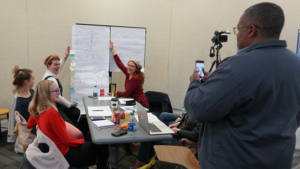 So why the charrette approach?

“There is something to be said for a short, intense charrette where everybody comes to the table in interdisciplinary teams,” Calkins said. “They’re literally sitting around a table, sketching and ideating, and using their expertise right then and there as opposed to sending emails back and forth or having periodic meetings. Collaboration is the key to the design quality.”

Boone said having the interdisciplinary dynamic will help students long-term.

“For some of them, like students in environmental science or students in engineering who participated, it was their first experience with design thinking, in addition to the real imperative, which is how do I attack climate change,” he said. “So it worked in a way of exposing us to them and them to us in different ways of thinking and really simulating some of the situations that our students are going to have to build with practitioners to solve these complicated problems.”