A Winding Road to Design 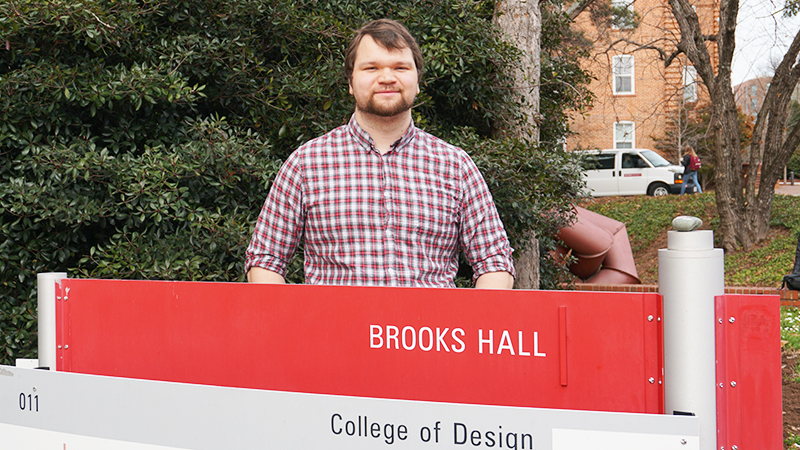 Stephen Waddell has taken a non-traditional path to design. After coming to NC State University with the intention of majoring in computer science, then spending a year and a half in Art Studies, Waddell applied to the College of Design’s Art + Design program. “I wanted to challenge myself to work more directly with multimedia,” Waddell says. “I didn’t come in [to the program] with insane drawing skills. I just sort of did a little bit of everything for awhile and participated in some almost industrial-style extracurricular activities to create a product for the [Lulu] eGames… So it was a kind of winding road to get to Art + Design, but once I was here, I was very interested in giving it my all. I thought it was a huge opportunity.”

“Find the things that you’re interested in and practice them. Find resources to develop them. Put hours behind a keyboard or a pencil or pen or marker. Actually having the time to work on these processes tells you a lot about yourself.” —Stephen Waddell

With this mindset, Waddell explored what the College and the University have to offer beyond the classroom. When he needed help designing a pair of bespoke wooden headphones for the Lulu eGames, Waddell sought help from the Crafts Center. He has also learned to use the 3-D printer in the Makerspace, and last spring, Waddell participated in The Leading Strand collaboration between the College of Design and the College of Sciences. Working in teams, Waddell helped create three interactive exhibits that illustrate advanced scientific concepts in easy-to-understand formats. Two of these installations have been selected for inclusion in the ACCelerate Creativity and Innovation Festival 2019 held at the Smithsonian Institution’s National Museum of American History in Washington, D.C. The festival is a celebration of creative exploration and research at the nexus of science, engineering, arts, and design.

Waddell was excited to hear that the two projects would be on exhibit during the ACCelerate festival. “It really drives me to try to put forth my best effort… I want to make sure that what we’re showing people is representative of the work we’re doing here. There’s a lot of time and effort behind it,” he says.

After six years at NC State, Waddell is graduating this spring [May 10, 2019]. His advice to design students or students considering switching into a design major: “Find the things that you’re interested in and practice them. Find resources to develop them. Put hours behind a keyboard or a pencil or pen or marker. Actually having the time to work on these processes tells you a lot about yourself.” NC State, Waddell says, has been a great place to learn, but not just because of the classes. “NC State is a resource more than anything else. There are so many places and people here that can help you understand more about what you’re trying to do… So many resources that give you the ability to do hands-on things that you could never do yourself.”

Even though switching to a design major meant a longer stay on campus, Waddell hasn’t regretted the decision. “It’s been an insanely beneficial journey,” he says.