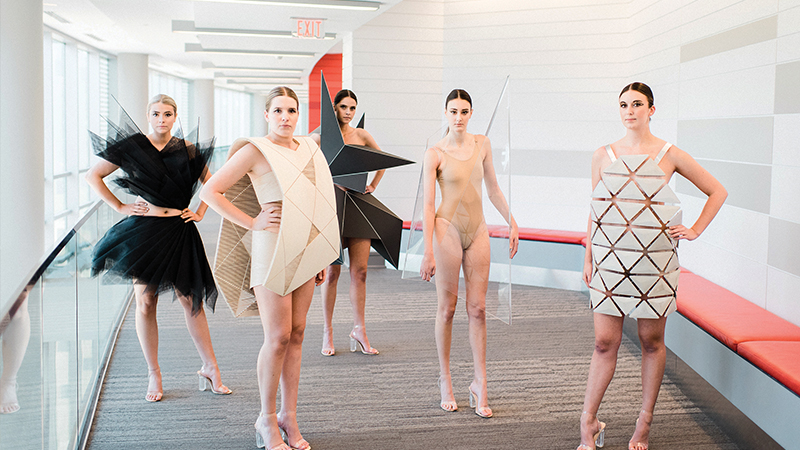 Showcasing a collection of angular, geometric wearables made from rigid building materials such as cement, poster board, and Plexiglas, the architecture student design team of Cameron Elliott [BEDA ’18] and Samantha Lackey [BEDA ’18], took a decidedly unique approach to the 17th annual Art2Wear (A2W). The College of Design’s A2W fashion show is open to all design students but typically features Art + Design and Industrial Design majors; Elliot and Lackey saw the show as a challenge and a test of their abilities and creativity. 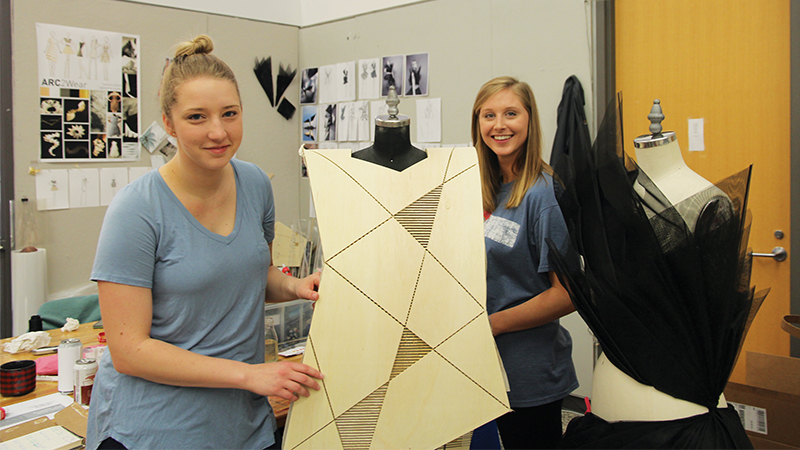 As seniors, design students have the opportunity to take a swing course in a different major as a studio elective. “We saw that A2W was on the list of options and together we thought it sounded different and wanted to try it out as a way to stray from architecture,” Elliott says. “We knew we would need to go full force next year for our fifth-year, and so, it began as a big ‘what-if.’”

The two reached out to Associate Professor of Art + Design and Director of Art2Wear Justin LeBlanc, who encouraged them to participate and became an advocate and mentor. “It’s important that students from different disciplines participate in A2W,” states LeBlanc. “This enhances the outcome of the event and exposes students to new skills, technologies, and abilities that they didn’t realize they have. It also enhances the studio environment for all designers.”

Though excited and eager for the challenge, Elliot and Lackey felt behind before they even got started. Usually, A2W designers present two complete looks for submission consideration early in the fall, and then, throughout the semester, they complete the remainder of their collection. “We didn’t have anything complete,” Cameron admits.

Feeling the stress, they decided to design their collection with materials they were already comfortable with. Lackey says, “We thought, what if we did something with an architecture-inspired line? We knew we could push the materials beyond what we knew, from what we learned over the past three years in studios and model building.”

Some of their first sketches and wearable products were traditional but utilized building materials. “We made a skirt out of wood, and it looked like a skirt,” Elliott notes. “Justin suggested that we produce something more avant-garde or abstract and to not make them so realistic,” Lackey says. Again drawing on their existing knowledge, the pair found inspiration from their First Year Experience course in architecture, where, Lackey says, “you don’t jump into designing buildings, you start with conceptual architecture. It is abstract and artistic.”

The pair started using building materials such as tile, screws, and carpet. “We pushed boundaries of literal architectural materials,” Lackey says. But they soon determined that they were running into the same issues they would have if they had used unfamiliar textiles. “We didn’t know how to really manipulate those materials very well, and we decided it would hinder our ability to do more abstract things,” says Elliot. “So, we came back to our roots and thought that the ridged materiality of all the modeling materials that we have been using would really convey what we were trying to accomplish through conceptual architecture.” Elliot and Lackey turned to materials such as wood, cement, poster board, and Plexiglas that are typically used when making architecture models.

“It took us a while to figure out how we were going to approach the project, but once we figured it out, it was a lot easier,” shares Elliot. She admits that their earlier challenges resulted from changing directions several times that resulted in “lots of scrambling” trying to find “a cohesive collection” after having two completed pieces. Even though this back and forth is part of the process, Elliot advises others, “no matter what it is—figure out your direction and stick with it. Additionally, push the boundaries of what you think you can do.” 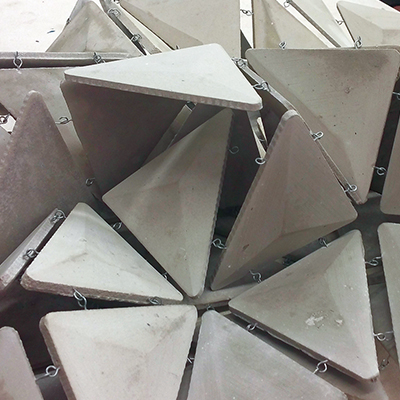 With each piece being directly inspired by an architectural building or material, the collection title “Arc2Wear” seemed “to just say it all,” Elliot says. Much of Elliot and Lackey’s challenge came from the fact that not only were they using materials in a unique way, but the scale of the project—designing for a model, not a building—was entirely different than what they were used to. They found that drawing inspiration directly from building images offered support. Lackey says, “these inspirations allowed us to be abstract in our designs, and although they will be worn, we are taking architectural ideas and imposing them onto fashion.”

The team went a step further and even mimicked construction technique in their creation process. For one piece in their collection, the Elliot and Lackey molded and poured miniature concrete panels, and once dried, connected them together with small brackets. These panels became the basis of a wearable that was one of the crowning jewels of their collection. 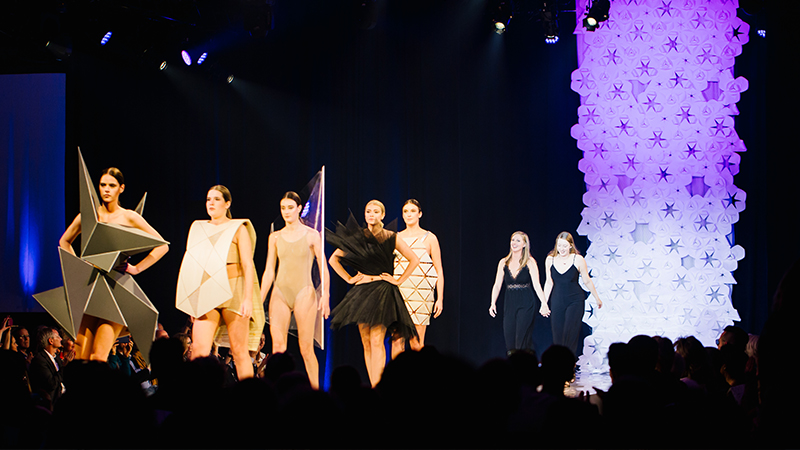 The Arc2Wear collection is comprised of five unique pieces, all influenced by architecture. “It has been a great experience that we can talk about and show in our portfolios to showcase our ability to push boundaries and challenge ourselves,” Lackey adds.

Both Elliot and Lackey are excited about all the positive feedback about their collection and the questions and comments from so many people about the materials and the architectural influences. “It was hard work, but it was so worth it,” Elliot says. Their best advice to other students is to “go for it, and do it because you will regret it latter if you don’t.”