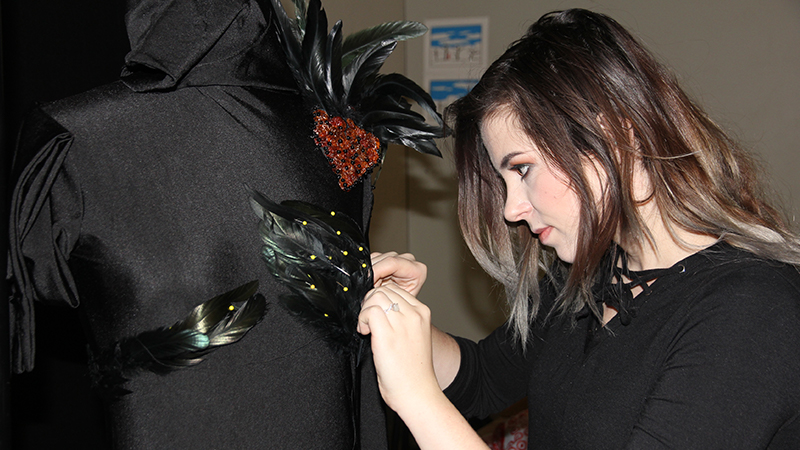 Losing the faculty of sight can have an indelible impact on one’s perspective. It became a reason for Alyssa Padmos to participate in the 2017 Art 2 Wear (A2W) fashion show. Padmos graduated in May with a degree in Animal Science with an industry concentration in agriculture and research and a minor in Art + Design. The theme of this year’s show, “Déjà vu,” was particularly resonant to her. “All I know are things that I have seen before, and this is how I see the art of déjà vu,” she says.

As a teenager, Padmos was diagnosed with Stargardt disease, a degenerative eye disorder that eventually results in blindness. “I am going blind, so I’m pulling things from my memory, as at some point I won’t be able to pull in new images,” she explains. Participating in A2W allowed her to implement a passion for design and making, as well as reflect upon personally significant and inspirational childhood memories.

Having loved fascinators, headpieces generally worn by royalty on the side of the head and embellished with veils and other touches, Padmos decided to venture out and challenge herself with new techniques, materials, and the hope of learning many new things. Her collection, “Enigmatic Daydream,” included six handmade headpieces. “The inspiration for this collection comes from memories from my childhood where I grew up. There are three types of plants and three types of animals represented, all of which can be found in rural North Carolina.” 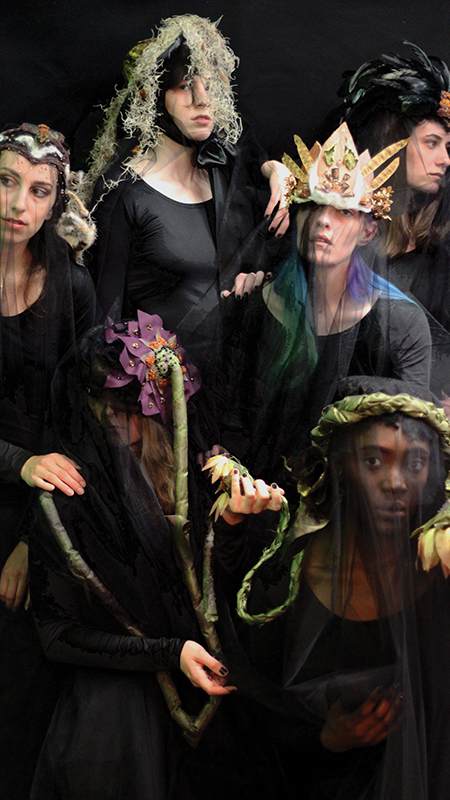 Headpieces are a trend that she hopes to bring back, but with a different perspective. Her collection incorporates some unexpected materials, including plants, feathers, dried cherry tomatoes, and alpaca fleece. Padmos ventured to an alpaca farm to learn more about the cultivation process of the material.

It is not often that a student outside the College of Design takes on the challenge of building a collection for A2W. The commitment is intense and requires hours of dedication. Padmos considered the endeavor a chance to prove that she could. “Doing this was a great opportunity—when people tell me that I can’t, it just makes me want to do more and prove to them I can,” she states. Her confidence and determination to accomplish everything possible are infectious.

“When people tell me that I can’t, it just makes me want to do more and prove to them I can.”

“I don’t want to limit myself; instead, I think, what can’t I do?” she asks. “No matter what discipline, background, or issues you have, you can do it if you have a passion for it—especially if someone says you can’t.” Assistant Professor of Art + Design and Director of A2W Justin LeBlanc discusses A2W’s inclusive nature: “Art2Wear is an opportunity to celebrate the skills of students across campus throughout the different majors. In a way, Art2Wear is an accumulation of talented students who have a variety of interests, backgrounds, and skillsets that come together to create an amazing show.”

“I love theater and sewing and enjoy making my own clothes. I am self-taught, and it’s a stress release,” states Padmos. “I’m glad I made this decision to do A2W—the stress is different. The design thinking process is like the scientific method. You have steps to follow, and if it doesn’t work out, you start at the beginning and you keep going until you get to the end result, and hopefully it meets up with your hypothesis, but if not, that is okay.”

The sunflower turban she made was special to her for several reasons. Growing up, her mom grew sunflowers, and Padmos remembers how amazed she was by their beauty, even when they were at the latent stage of life and the petals became brown and the stems slumped over. “I saw van Gogh’s famous ‘Sunflowers,’ in person, and this too was an inspiration.”

“The sunflower hat was my favorite in terms of a showpiece. It was interesting from every angle, and each perspective looked different,” she muses. “It also looks different on every single person, because of the sizing adjustment.” Each of the fascinators was adjustable—an important element to her designs. “I wanted to make certain that there was a way to adjust the hats so they are sustainable to different people. I don’t want this to be a reason someone can’t have a hat.”

The making process required a lot of trial and error, not only on the sunflower hat, but on each project. Padmos hand-painted, dyed, beaded, braided, and used unorthodox materials. Her father offered up copper wire that she used like a vine, wrapping it around the model’s back and arm.

Padmos enjoyed the collaborative energy. “The greatest thing about the studio is to just be with these other designers and feed off of that. The experience was great. To be around peers going through the same process is important.”

“The greatest thing about the studio is to just be with these other designers and feed off of that.”

“There was a lot of blood, sweat, and tears in every single one of my pieces,” she adds. “A lot of engineering feats—some easier, some harder. I learned so much. Many of my headpieces were completely different than I originally imagined.” The turtle shell, for example, was originally going to be like a traditional pillbox, but through many iterations and conversations, it became far more organic and sculpted.

At the end of the event, Padmos was moved by the number of people who approached her and inquired about her work. “I didn’t think it would receive as much interest, and so many people wanted to get a closer look,” she states. But the absolute best part was when a peer shared how inspired she was by Padmos. “She said she was an artist, and she too is losing her vision and thought that it was cool that someone from ‘our’ platform is being recognized on a larger scale and is bringing awareness to the disability.

“The fact is—this is not a hindrance—but a different way to look at things. You can still do art, even though you can’t see,” she concludes.