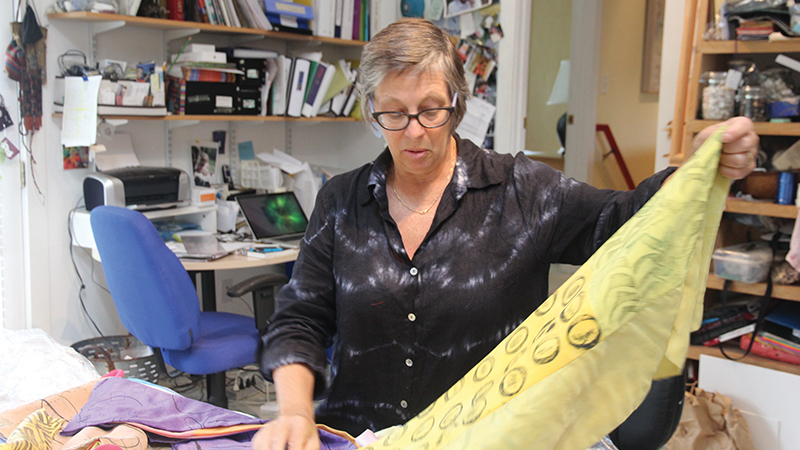 Marguerite (Peg) Gignoux [MID ’04] was a non-conventional student when she attended the College and has evolved into a non-conventional artist. “Teaching artist,” “textile artist,” and “community artist” are a few of the terms she would likely use to describe herself.

“I work in the community and make monumental work and believe art should be accessible, beautiful, and fun. I want to bring art to people that might not have it in front of them, and also defend my own art practice to prove this duality of being private and public,” she emphasizes.

“I want to bring art to people that might not have it in front of them, and also defend my own art practice to prove this duality of being private and public.”

“It was thrilling to be in my 40s and intersecting with women in their early 20s who were at the start of their own discovery with the arts and themselves,” says Gignoux. “They were fresh and buoyant, and I wound up really resonating with them. Today I maintain friendships with them, 20 or so years later.” 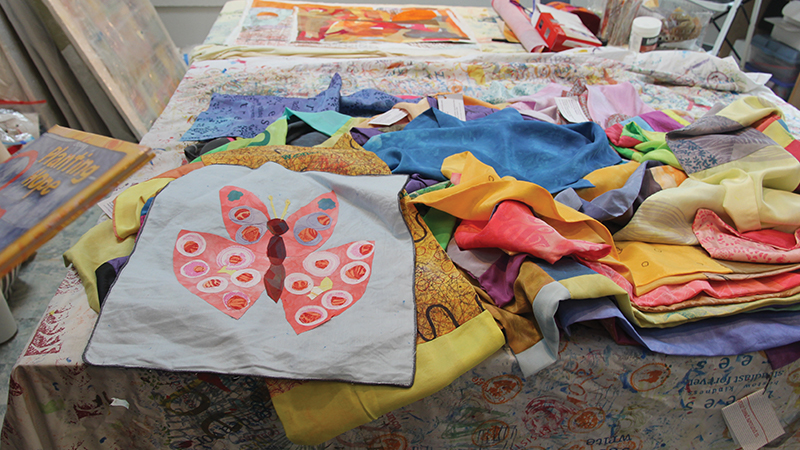 The College and the program provided Gignoux with exposure to technology, the fibers lab, and faculty, which she says was invaluable. “I knew Susan Brandeis and her work, and I knew I would be supported by the many resources available at the College. I wanted people [faculty] at the highest level to have the language of textiles to help me grow as an artist.”

After completing her graduate degree, she continued on a path of creativity. She teaches at numerous crafts centers, higher educational institutions, community centers, libraries, nonprofits, pop-up studios, works on large-scale commissions, leads community projects, has a robust personal art practice, and does exhibitions.

“I have all these partnerships. Some of them repeat every year.” She teaches at Elon University during the winter term and does projects at Durham Academy with sixth graders. Recently she collaborated on a children’s picture book project with a local nonprofit, PORCH, People Offering Relief for Chapel Hill-Carrboro Homes. This is an all-volunteer community organization that focuses on food relief.

The book was developed in collaboration with the afterschool youth and ESL students from a local middle school under the direction of writer Susie Wilde. Once the story was complete, Gignoux introduced the world of textile design to these students, using a myriad of techniques including dyeing, printing, and illustration to tell the story. Their creations were integrated into the book by designer Steve Godwin.

The final result, Planting Hope, is a beautifully vibrant “book for kids by kids.” Sales proceeds support the mission of PORCH.

Another community art project Gignoux developed is Wrap Your Head Around It (WRAP), which unites a variety of partners, patients, hospitals, clinics, artists, universities, and crafters to write, print, dye, sew, and create one-of-a-kind scarves that are given to cancer patients and the cancer community. The scarves are more than just wearable items, and for the artists and recipients, their meaning speaks volumes.

The project evolved through community involvement with youth poets that included dyeing and screen printing poetry on cloth. “That was thrilling, and I wanted to figure out how to keep getting text into textile, and coincidentally, I had a number of female friends and acquaintances who had been affected by cancer. I thought about the power of bringing words into silks and wrapping people—wrapping women’s lives in that.”

Through hard work, networking, and a strong commitment to succeed, Gignoux put the pieces together to launch her vision. The poet Grey Brown was instrumental in “creating a body of words based on the randomness of words.” Together, they built up text through events open to the community.

“We built up language together, and words and comments. These women were fantastic in unpacking their sorrows, their fears, their laughter, and their humanity, and that prompted interesting wordplays—sometimes a distinct poem, sometimes just words. We made screens, and I built that language and then tapped into people I knew throughout NC who had access to fiber studios,” Gignoux describes.

After the words were compiled, the textile work began. Gignoux gathered trained textile designers and untrained enthusiasts to introduce the artistic process of creating the scarves.

In this community setting, individuals gathered, learned from each other, shared stories, and made something special. Some had never dyed or printed on cloth before, she says. “They start out, and they may make a mistake—blips or blops—and sometimes they nail it, or other times they have some very odd pieces.” She saves these extras and provides them to the next group, who may not see a mistake but a perfect addition. Gignoux considers this “unifying the cloth. It can be a teaching moment for me or a discovery moment for another.”

“We save everything, and by hacking down some of these odd bits and joining them with quieter sections or vibrant strong pieces, the person actually creating the work gets to be a curator, to take things that wouldn’t ordinarily live together and make their own expression,” says Gignoux.

“By hacking down some of these odd bits and joining them with quieter sections or vibrant strong pieces, the person actually creating the work gets to be a curator, to take things that wouldn’t ordinarily live together and make their own expression.”

The project grew over a period of six months. “People contributed with dollars and with their time.” She has been able to conduct WRAP twice thus far, with future plans to continue and grow it.

“We have made 400 scarves that have gone to 18 different states,” she says—her tracking is imprecise, so it’s possible other states—maybe even other countries—have received scarves.

The scarves are a symbol of hope, compassion, and strength. “Instead of making a massive thing that stays in one place, these go off and have their own adventure,” Gignoux says. She has exhibited groups of scarves, and finds gratification in their “release.” She adds, “this is one of the nice things about working with a textile that is an actual wearable. It has other actions and purpose.” The wearers use these scarves in many ways and create their own meaning for them.

“I even have had scarves that were sent to people that were ill and passed, and then someone has brought that scarf back to me, and it’s been worked on and then released again.”

Each scarf is unique, and silk is always the predominant fabric. “Silk is the most comfortable cloth to wear. It is radiant, it takes color beautifully, it’s warm and cool to the touch. It has this arc of usefulness and beauty that makes it important. Even though crochet hats keep you warm, often women don’t feel beautiful in them. [Silk] is about wanting to find an expression of beauty with the cloth, and maybe some irreverence with color. Women wear these as armor, and in many ways, I think the silk matters.”

In her next chapter, Gignoux hopes to bring this project to the Boston area by making connections with organizations like Dana-Farber Cancer Institute and other schools, private businesses, and creative communities.

Gignoux’s project has brought together a community of people who’ve shared personal experiences, gratitude, empathy, and inspired those affected by cancer—that’s a wrap.