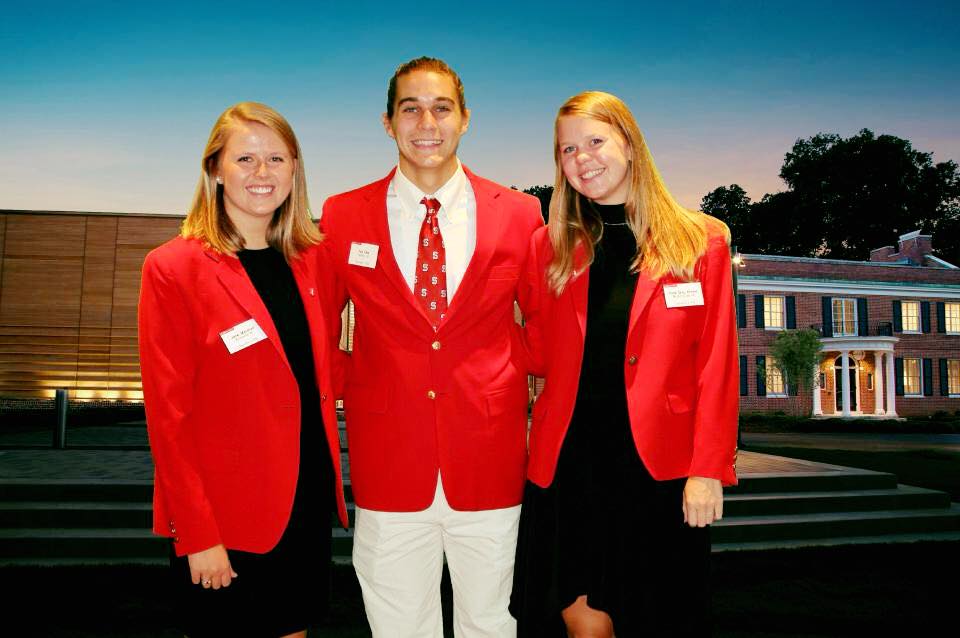 When senior industrial design major Katie-Gray Altmann graduates from the College of Design in May, there is no doubt that she will have left her mark on the University. Altmann has exemplified “think and do” throughout her university career by serving as a chancellor’s aide for three years; facilitating the development of the nonprofit-focused studio, Design it Forward, offered last fall; and launching the first Social Innovation Fellows program with NC State’s Institute for Nonprofits, all while managing a demanding schedule of design studios and coursework.

Altmann has continually used her designer’s problem-solving mindset to advance her college career, but even so, she was concerned about finding an internship for her senior year. She wanted an opportunity that matched her unique talents and interests, and as an industrial designer who values social impact projects, public speaking, and graphic design, she didn’t seem to fit existing positions. Altmann reached out to Elizabeth Benefield, social entrepreneurship program manager for the Institute for Nonprofits, who Altmann knew from attending a few Institute-hosted events and dinners. Altmann shared her concerns with Benefield and also discussed her interests and what differentiated her from her classmates. Altmann says, “I want to use those differences for a career. I don’t love digital modeling, for example, but I love public speaking. We had a very open conversation, and at the end, [Benefield] said ‘You are not going to believe this, but I have the perfect job for you.”

Benefield explained that the Institute was in the process of creating a Social Innovation Fellowship program, and they planned to work with Aly Khalifa [’90, ‘93], a design and engineering entrepreneur who specializes in invention development. Altmann had met Khalifa before and knew his educational background and career path were similar to her own. She was also very interested in his work on social impact projects. When Altmann heard of Khalifa’s involvement in the new program, she said, “‘sign me up.’ I really wanted to work with him.”

Altmann began working for the Institute for Nonprofits over the summer, teaming up with Benefield, Khalifa, and Richard Clerkin, Ph.D., the Institute’s executive director. They worked together to establish the learning objectives, curriculum, and structure of the Social Innovation Fellowship program. Part of Altmann’s jo, in the beginning, was to organize meetings with potential supporters. She says, “I did a lot of relationship building over the summer.” She also focused on research and strategic planning, mapping out who their supporters were, how they were going to build a presence on campus, and how she would create a brand and visual representation for the program. In the fall, they launched and began accepting applications.

The Social Innovation Fellows program is a supportive and educational program for undergraduate and graduate students interested in learning adaptive and technical skills to become successful social entrepreneurs and innovators. This first year, the program received over 80 student applications and 30 were accepted. Those selected receive guidance from “brain trust” mentors, monthly skills-based Innovation Lab experiences, and a micro-investment of $1,000 for prototyping and development.

Altmann’s work for the Institute helped her look at her education and skills in a different light. “It has been a way to use the creative process like I never have before. It was challenging because of the technical aspects and because it involved a lot of graphic design work, which isn’t my background, but it really opened so many doors. I cannot even say how many people I was able to introduce myself to or the confidence I got from sending emails to so many faculty and staff… It was a huge confidence builder.” The best part of the job, Altmann says, is that “it put me in some instances I never thought I would be in. I think that’s the best part about a new job—you get a new challenge. It’s different than a studio project because there’s no rubric, you don’t really know which direction to go or how to be successful. You’ve just got to figure it out. Plan it and do it.”

With all the personal connections that Altmann was forming, she had expected to find full-time post-graduation employment through a network connection, but when the perfect position opened at Red Hat, she applied, even though she didn’t know anyone at the company. Altmann’s experience and education stood out, and she soon had an interview and a job offer to work for Red Hat as a Creative Strategy and Design Intern, a newly created position that will allow her to work with both the design and strategy teams. “They wanted somebody who could do both—be a part of the creative strategy team and the design team, which though they collaborate often, are not the same. It puts me in a liaison position,” which, Altmann points out, is very similar to her role with the Institute for Nonprofits.

Altmann is excited to find that her experience with the Social Innovation Fellows program and her design degree are helping her forge a path where creative strategy and design can coexist. “For awhile I thought I was going to have to choose between a company with a good mission and heart or a big company that can offer job security where I used my design skills. I was so distraught about it. I don’t think that’s the case anymore. I see there’s plenty of opportunity to use both skill sets and have that happy middle.”

This semester, Altmann has a light course load, owing to her summer study-abroad in Prague in 2016. She is catching her breath, reconnecting with friends, and checking off items on her college wish list before graduation. She also continues her work for the Institute until May, creating a marketing plan for the second year of the Fellows program, reformatting the application, and designing all of the program’s visuals and social media postings. Looking back on her work creating the Fellows program, Altmann is pleased with the sense of connection it gave her to the NC State community. “It made me feel so close to the University. After working for the chancellor for three years, I already had that… but now I’ve been able to build something [the Social Innovation Fellows program], and it’s a real thing and every time I see all the student fellows together, I’m blown away because I think ‘I helped do that.’ This is a ‘real thing’ and will continue to be a ‘real thing’ after I leave. It’s like leaving a mark.”