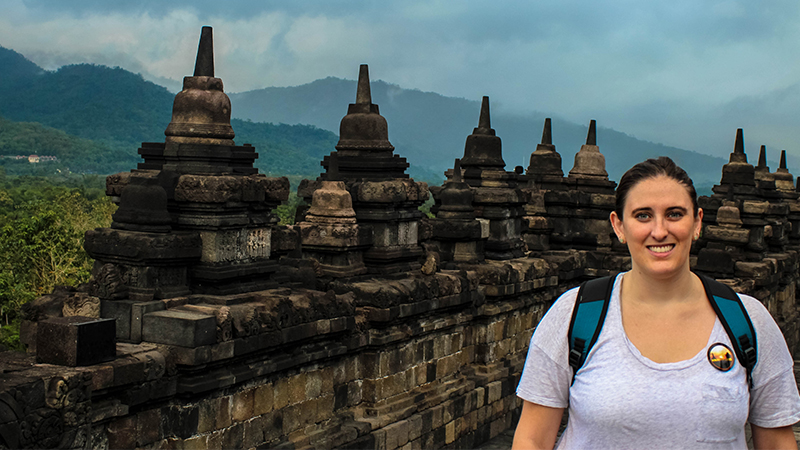 “I’ve been to 32 countries in total through my travels. Places like Paris, London, all throughout Italy, Spain, Turkey, Ukraine, and Greece; however, I’ve never been to Southeast Asia,” says Sarah Casaday, who is a teaching assistant for an architecture history course, an active member of the Architecture Graduate Student Association, and who will be graduating with her M.Arch degree in May. Casaday is adventurous with a passion for learning about new places, different cultures, and “see[ing] the architecture in person.”

Her travels often take place during summer breaks, and she conducts research to ensure she has the opportunity to experience historical and cultural venues that offer the most rewarding architectural influences of each place she visits.

In July, she finally ventured to Southeast Asia, where she visited the Buddhist temple of Borobudur in Indonesia and the Buddhist and Hindu temples of Angkor in Cambodia. Her interest was in the religions and cultures of these areas and how these particular temples of sacred architecture were preserved or transformed to serve the changing religious and cultural needs of their people over centuries.

Her fiancé, who has his master’s in history, accompanied her, and Casaday explains, “he shares the history of places, and I can appreciate the architecture. It was a great travel relationship.”

What made this trip even more rewarding was that Casaday was the recipient of the 2017–18 Noble McDuffie Study Abroad Scholarship. In her scholarship application, she shares that she was already planning to travel to Southeast Asia and that the scholarship would allow her to better appreciate the culture of the people and local traditions by taking classes with local artisans in stone cutting in Angkor Wat, Cambodia, and batik fabric dyeing in Yogyakarta, Indonesia.

She learned of these courses through Backstreet Academy, an online resource that offers travel tours, unique activities, and things you can do with local hosts for adventurous people like Casaday. “It was an in-person experience—hands on—you were working with a local who did this for a living, and they teach these courses and show you what they do.”

“I would not have taken these courses on my own; the scholarship allowed me to do this,” she continues. “To experience these places through the culture, the people, and the religion of the region—it was a great immersive travel experience that I would not have otherwise had.”

During her one-day course in stone carving, she worked with a man who is now in his mid-30s and started as an apprentice when he was 12 or 13. Casaday explains that he grew up near the amazing temple of Angkor and that, “through his work, he preserves the culture, the carving, and the motifs, and keeps stone carving alive.”

In Yogyakarta, Indonesia, on the island of Java where the Borobudur temple is located, Casaday participated in a batik fabric dyeing course. “This was very interesting; [there was] more of a language barrier with the person teaching the course, but it made it all the more interesting,” she says.

Batik is a way for the Javanese people to preserve their culture and their past. Many of the common motifs in batik are geometric patterns visible in the carvings at Borobudur. Using a pattern of the iconic bell shapes of the Borobudur temple as the foundation of her design, Casaday was then taken through the traditional process of batik dyeing to create her own textile. “The woman who taught this course shared that she is preserving a dying art form and that 20 years ago she had customers from around the world. Now it’s a lost art; she referred to the ebb and flow—it is coming back.”

When asked what the best part of her trip was, Casaday replied, “definitely Angkor Wat and Borobudur in Indonesia, which is a Mahayana Buddhist temple—the largest Buddhist temple. Just seeing them was amazing; being alongside these two temples and seeing the architecture with a lot of details, the carving of the stones, and the intricate ways they designed these structures, and how old they are—this was really unique.”

The initial purpose for this travel was Casaday’s interest in the intersection of different religions and ethnic groups within these two cultures. “In a time when religious intolerance is a contentious issue, I am interested in the lasting physical remains of the formerly practiced religions despite the transition between different religious groups in these two countries.”

Angkor Wat was originally constructed as a Hindu temple in the early 12th century; however, when a new ruler converted the Khmer Empire’s religion to Buddhism, the Hindu temples and symbols remained throughout the capital. New Buddhist temples were constructed, but the original structures at Angkor remained unaltered to suit the new religion of the Empire. Similarly, Borobudur was built as a Buddhist temple in the 9th century, but today it is located within a country with one of the world’s largest Muslim populations.

“Seeing and experiencing these different cultures was impressive. The fact that the remnants of these religions are still there today, even though the current environment is different. The tolerance for this was impressive,” Casaday emphasizes. “Hardly anything of the temple has been altered; none of the original carvings have been changed or destroyed. They have added things, but they did not destroy or alter.”

From a child who always played with logos and has been steadfast in the pursuit of architecture, Casaday has grown through her studies and travels to realize that it’s the architectural history that motivates her and provides the continued passion to explore distant places, cultural uniqueness, and the influence of architecture.