Tate Britain: Home of British art from 1500 to the present day

A reflection of a visit to the Tate Britain by Giovanna Veltre who is participating in the Study Abroad in London.

On the twenty-eighth of June, we visited the Tate Britain founded by Henry Tate. Tate had quite the art collection and wanted to leave it to the public. He was eventually given the land where the Tate is located now. To this day, the Tate holds the largest collection of British art and remains free to the public.

During our Tate visit, we had the opportunity to view the Painting with Light exhibition. It showcased art in regards to the relationship between photography and painting across the Victorian and Edwardian ages. After the emergence of photography, painters were able to photograph their subjects allowing for change to the perspective of their paintings. David Octavius Hill and Robert Adamson photographed several landscapes and turned them into paintings. In Hill’s paintings, his photographic views, or perspectival references, were apparent. As tourism became more popular, guidebooks and souvenirs began to be illustrated by photography. Painters then began using them as references for paintings. Thomas Ogle used A.W. Bennett’s photo of The Bowder Stone c.1864 to create his painting of the same boulder. 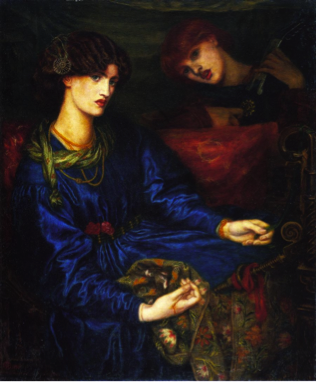 Photo then began to play a major role in reproduction. Artist’s like Thomas Seddon used photography to create prints of his work. Photography became so popular as a tool for painters and even classical sculptures, photography studios and photographic archives began appearing in art schools. The Camera Club on Charing Rd. allowed artists to rent out studios to photograph their subjects.

As the shoe progressed into the Tableaux period, the staging of models became very distinctive part of literary paintings and photography. As books and plays became more popular, artists would recreate literary scenes in their paintings or photographs. This created a thriving trade in prints, illustrated books, and journals.

We then saw the emergence of the muse. Models played an important role after the pre-Raphaelite period. Paintings became sensual and used models with striking looks. These qualities are seen in Dante Gabriel Rossetti’s “Mariana”c.1870.

In the 1880’s, landscapes became popular again. James Abbot McNeill Whistler was a well-known landscape painter and photographer of the time. Especially for his series called Nocturne.

Nearing the end of the exhibition and the second half of the nineteenth century, Japanese culture became and influence and inspiration for British artists. Edward Atkinson Hornel, a Scottish painter, travelled to Japan and adopted a decorative style inspired by Japan. Instead of using the graceful contours of Japanese art, his paintings were translated into flat, colorist tapestry using heavy brush strokes.

Late into the nineteenth century, painters were influenced by Italian Renaissance artists, like Michelangelo and da Vinci, and began to pursue and idealized beauty. The show closed with Rosseti’s, “Prosperine” modeled by Jane Morris.

Overall, I enjoyed the exhibition to the fullest. It was very informative and it helped me better understand the influences and relationship between photography and classical painting. It also helped me understand the influence British artists had on the entirety of the period; however, the Tate did display a bias view being it is a museum exclusively of British artists.