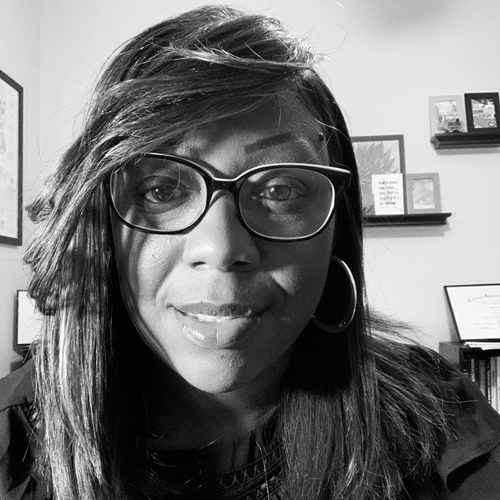 Tasheka Arceneaux-Sutton is an Associate Professor of Graphic Design. She has taught graphic design at Southeastern Louisiana University and taught Typography at Loyola Marymount University. She is also a faculty in the low-residency MFA program in Graphic Design at Vermont College of Fine Arts. Arceneaux is the principal at Blacvoice Design, a studio specializing in branding, electronic media, identity, illustration, print, and publication design, for educational institutions, non-profit organizations, and small businesses. She has provided design services for the Museum of Contemporary Arts (MOCA), HarperCollins, Loyola University New Orleans, Tulane University, and Loyola Marymount University’s LeBand Art Gallery. The use of typography has a strong presence in her work—she is a type enthusiast who enjoys hand-lettering, typesetting, and deconstructing type through a combination of analog and digital processes. Arceneaux has exhibited work nationally and abroad, and in 2013, her work was featured in Idea: International Graphic Art and Typography magazine.

Arceneaux’s research focuses on discovering Black people omitted from the graphic design history canon. She’s also interested in the visual representation of Black people in the media and popular culture, primarily through the lens of stereotypes. She is the co-curriculum designer for Black Design in America: African Americans and the African Diaspora in Graphic Design, from the 19th through the 21st Century—Black Design in America is a series of pre-recorded BIPOC centered history courses. Her essay “A Black Renaissance Woman: Louise E. Jefferson” is a part of a collection of essays in the book Baseline Shift: Untold Stories of Women in Graphic Design History, which releases in October of 2021 by Princeton Architectural Press.

Arceneaux holds an MFA from the California Institute of the Arts, where she also worked as an in-house designer in the Office of Public Affairs. She also has a BA in English from Loyola University New Orleans.

MFA California Institute of the Arts