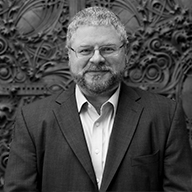 J. Mark Scearce is one of North Carolina’s most recognized and performed composers. Recipient of the 2010 Raleigh Medal of Arts and the 2009 International Raymond and Beverly Sackler Prize in Music Composition, Scearce has sixty active titles in his catalogue, including musical settings of more than two hundred texts by forty poets. Scearce’s many works for orchestra, band, chorus, opera, chamber, and ballet have been performed throughout North America, Europe, Asia, and the Pacific. The recipient of five advanced degrees in music, philosophy and religion, including the doctorate in composition from Indiana University, Scearce has won six international music competitions and his music is available on seven commercial recordings. Having taught on the music faculties of the Universities of Hawaii, North Texas, and Southern Maine, he was Director of the Music Department at NC State for nearly a decade before becoming a tenured full professor of Media, Arts, Design and Technology in the College of Design in July 2012.

The 99 Beautiful Names of God

Masque of the Red Death