Everyone is a Designer: Tangible Landscape Democratizes Design

When the elevator opens to the fifth floor of Jordan Hall, I’m out of sorts from the trip across campus and hoping for a minute to collect myself. But, Payam Tabrizian is punctual and waiting for me. He does not seem the least bit frazzled or hurried, like I’m feeling at the moment, or like you’d expect of someone earning a dual PhD in Design and Geospatial Analytics while also working on a graduate minor in Cognitive Science.

Tabrizian’s research and interest lies in human-centered design, specifically the intersection of landscape architecture, environmental psychology, and neuroscience. On his personal website, Tabrizian calls himself “an open-science evangelist” who is committed to finding an “open-source solution.” I’m curious to see how this interdisciplinary concoction cooks up.

The Geovisualization Lab (GL) at the Center for Geospatial Analytics is just a short walk down the hall. “I’m always here,” Tabrizian says as we pass through the door. “Here” isn’t an entirely bad place to spend your time. Airy, open, and filled with adequate natural light from the large side windows, the lab is modern and new looking. It hums with the sound of computers and smells faintly of warm plastic. I start to ask Tabrizian some questions about his work, but it is easier to understand after seeing it.

Just inside the lab is a hollow model covered in kinetic sand. An overhead projector casts green and blue light and contour lines onto the sand and Tabrizian’s hands as he picks up a wooden knife and cuts sand from one spot and adds it to another. The contour lines change immediately. Tabrizian adds pushpin trees and patches of colored felt, representing dense patches of vegetation. A monitor shows a 3-D rendering of the landscape. A virtual reality headset sits nearby, and Tabrizian explains that it is possible to virtually step into the world he has just created. 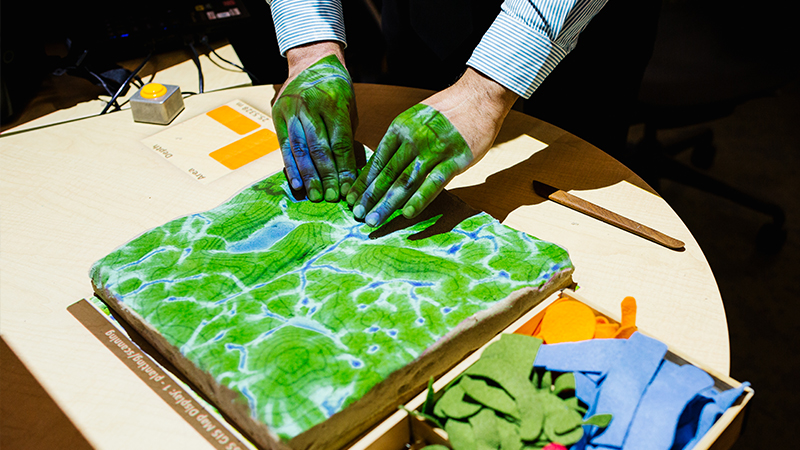 This is Tangible Landscapes (TL), a hands-on geospatial modeling technology that allows users to design and modify landforms in seconds. TL was originally developed by Associate Director of Geovisualization Helena Mitasova and students Anna Petrasova, Brendan Harmon, and Vaclav Petras. Their goal was to make geographic information systems (GIS), and geospatial modeling in general, accessible to everybody through an intuitive interface that uses free and open-source software. What Tabrizian brings to the table, however, is an understanding of aesthetic concerns in landscape coupled with ecological viability.

The tangible part of TL is supported by Geographic Resources Analysis Support System (GRASS) GIS, an open-source scientific platform for geoprocessing that draws off of extensive libraries of peer-reviewed scientific models, analyses, and simulations. Meaning, it’s always up to date and users can benefit from this wealth of knowledge without actually having to know it all, which is good because apparently GIS isn’t super easy to learn. “If you want to learn GIS, good luck,” Tabrizian says. “It’s a very steep learning curve, and at the same time, the interface software is very obtrusive; it’s not intuitive. Designers already work with lots of complicated software these days. You don’t want to give them another GIS education, another GIS software. You give them GIS in their hands. You project the GIS.”

Not only does this help the capital-D Designer, but also the layperson, or as Tabrizian says, “the designer in everyone.” Tabrizian and the team believes that they “can give people agency through tools that allow them to participate and create their own landscapes.” The team also makes all of their notes and presentations available online through GitHub, free and available for download. A complete tutorial on how to set up and use TL is online. “The whole system, every technology we have here is free and open source and can be replicated,” Tabrizian says.

Why? “Because we want to share everything. The whole idea of this lab is OSGeo. OSGeo is an international organization committed to disseminating geospatial science for free to everyone. Without needing to pay huge subscriptions fees, anyone can access open-source knowledge and science. The knowledge can be disseminated much more inclusively,” Tabrizian says.

Beyond an excuse to play with kinetic sand, TL is a valuable design and research tool. It can be used to assist with designing urban landscapes, predicting and managing disease spread via clear cutting, simulating wildfire spread and mitigation, and evaluating the impacts of construction on erosion and stormwater runoff.

“The bottom line is that you understand and experience things with your body, instead of indirectly perceiving through your eyes and ears. You learn by touch more than by anything else.” —Payam Tabrizian

Someday, Tabrizian would like to see TL used by the gaming industry to create virtual landscapes and animal habitats. This could be especially beneficial in educational gaming where a child could create her own landscape with TL and then step into her world with a virtual reality headset. Because the game would be hands-on and supported by GRASS GIS, users would benefit from an organic learning environment.

Tabrizian and his colleagues are already experimenting with using TL as a teaching tool. Landscape architecture students were given access to TL to learn grading, geomorphology, and hydrology and were surveyed and progress monitored throughout the study period. This hands-on learning method, called Tangible Interaction, allows for “embodied cognition,” Tabrizian says. “The bottom line is that you understand and experience things with your body, instead of indirectly perceiving through your eyes and ears. You learn by touch more than by anything else.”

Tabrizian claims that TL is “democratizing design,” but it is also humanizing and simplifying design for design professionals. “Designers are not always looking for the optimal, most functional way,” Tabrizian says. “They are looking to have their objectivity and aesthetics inserted in the design and are always speculating on the functionality. With TL you can manipulate it creatively without needing to know what’s happening on the backend.” In other words, TL allows designers to focus on the design without needing a PhD in geospatial science.

I’m left wondering, though, how does Tabrizian do it all? Unlike the technology he is developing, I know he’s not running on open-source software. “I was always dreaming about combining the ecological analysis and the human perspective. That was always a dream. PhD students have to work hard,” Tabrizian says. And clearly, he is.